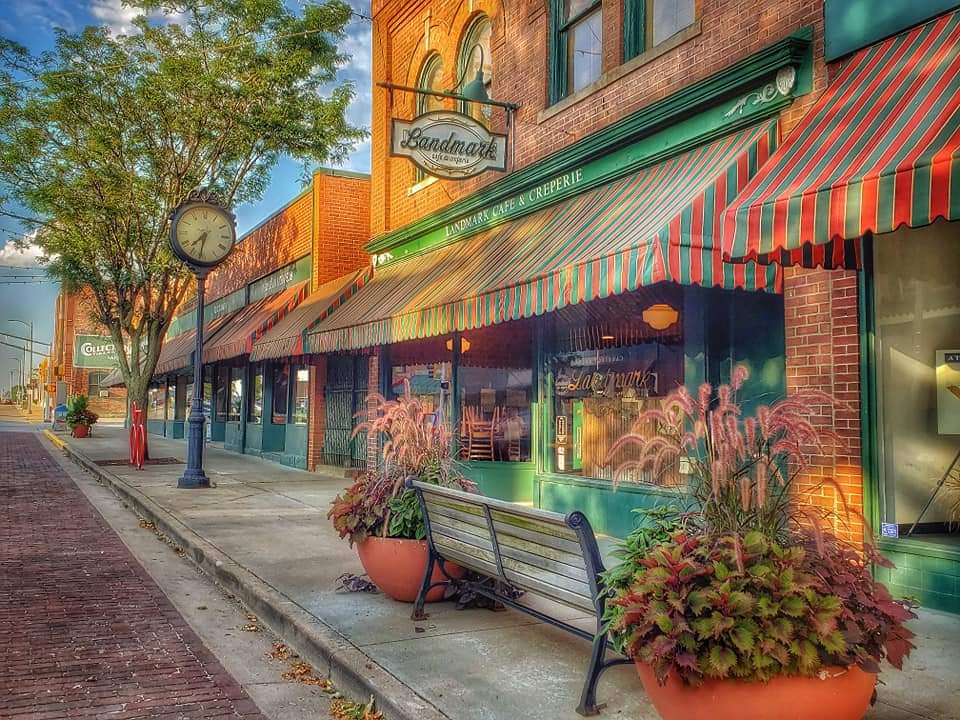 Visit our unique collection of independent, owner-operated shops on historic Seminary Street. You'll find everything from boutique clothing to fresh-baked goods, coffee shops, and outdoor dining, all in a charming & walkable downtown setting.

A warm welcome from all of us at Seminary Street! We hope that you will visit us in Galesburg so we can greet you in person. We're a group of small independent owner-operated businesses. Although each of us is a one-of-a-kind story with our own specialty, collectively we are united by our distinctive downtown neighborhood. The history within our three block area is infused with energy, originality and entrepreneurship that has made Seminary Street an intriguing destination. We're proud of the authentic charm and real sense of place that has made Seminary Street one of Illinois' most celebrated success stories.

In the first years of Galesburg's history, Seminary Street was the eastern boundary of the town. In this earliest period, the building of the Knox Female Seminary in 1841 was the only recorded construction of significance. Land on either side of the street was used for agriculture. Some residences appeared in the 1840's, and the first real commercial construction began at the intersection with Main Street. In 1854 the railroad arrived with a single track from Chicago, but there was no influence yet on Seminary Street. The railroad's first depot was constructed next to the Knox College campus, at the corner of South Prairie and Depot Streets. The first City Directory, published in 1857, listed no entries for South Seminary Street.

By the time of the Civil War in 1861, Seminary Street was home to several boardinghouses. Typically, the wooden structures occupied the corner locations, with land in between reserved for gardens and livestock. In 1873 the CB&Q double-tracked the route from Chicago to Galesburg. The first brick buildings appeared on Seminary Street in the 1880's; in 1884 the Atchison, Topeka & Santa Fe Railroad arrived. At the same time the CB&Q announced that it would build a new brick depot on South Seminary Street. More boardinghouses appeared in mid-block locations, as well. Names of boardinghouse tenants were published in the early City Directories, along with their occupation. On Seminary Street, nine out of ten residents were employees of the Chicago, Burlington, & Quincy Railroad. By 1887 all land adjacent to the street was consumed for building. The railroad expansion and location of the new depot on Seminary Street created a boom. The streetscape became an uninterrupted line of buildings, most with brick exteriors. The majority of buildings existing on the street today trace their origin to this period. Boardinghouses relocated to other parts of town. Wholesale grocers, meat packing plants, small cigar factories, bakeries, shoemakers, watchmakers, lunch rooms and new railroad hotels were but a few of the dozens of new listings appearing in the City Directories from this era. Other than the "Panic of '93" and the two to three years of depression following, this period represented Seminary Street's commercial emergence as the primary link from the railroad to Main Street.

Swift & Company announced the construction of a $50,000 building on Mulberry Street to be completed by 1913 (today occupied by the Packinghouse Dining Company). A block west on Kellogg Street, in 1914, plans were announced to build a 7-story first-class hotel, the Custer Hotel (now the Kensington). Next to the hotel, another new project began in 1915, the Orpheum Theatre, soon to be the area's most elegant vaudeville stage and silent film venue. Then, upon America's entry into World War I in 1917, new construction ceased. Seminary Street's commercial expansion was halted. It would be 78 years before a new commercial building was constructed along South Seminary Street. The war ended in 1918 and was soon followed by passage of the Volstead Act and prohibition. The B&B Cigar Store at 105 South Seminary was a popular speakeasy. With the stock market crash of 1929 and the ensuing depression through the thirties, Seminary Street saw many business failures. Vacancies along the street began to appear in the City Directories.

The building boom for Seminary Street ended years ago. Because of its proximity to the "Q" Depot, the street was well-traveled, but the growth cycle of years ago was now turning to decline. World War II brought more change. Older businesses from the turn of the century all but disappeared, Swift & Company and W.A. Jordan & Co. being the primary survivors. The commercial enterprises on the street were now becoming smaller businesses typical of "side streets". The street served an incubator role at times. Many businesses started up on Seminary Street, but moved on to other locations. On the other hand, some in search of lower rent found the street to be a long-term home. The real action was on Main Street. As the fifties ended, the large department store of Block & Kuhl's (later Carson Pirie Scott) anchored Main Street and Seminary (Lindstrom's today), while Osco Drug built a new store in 1959 on the southwest corner with its trademark concept, "Self-Service", becoming quite a draw. The spin-off traffic from these large Main Street retailers helped several South Seminary Street merchants survive.

For Seminary Street, the sixties exemplified its second class "side street" existence. Many business start-ups were noted, but only one or two enjoyed any longevity. Many of the buildings were beginning to show signs of age and lack of maintenance. The cycle of decline accelerated, bringing lower rents and frequent vacancies. In May of 1968 the Calico Cat celebrated its grand opening at 78 South Seminary Street by selling incense, paper flowers, custom clothing, stretch Pepsi bottles, posters and love beads. No one would have expected the fledgling enterprise to make it through the summer. It was a time of change on Seminary Street, but few anticipated the change that would come to downtown Galesburg within a few years. In the mid-seventies with the opening of a new regional shopping center in the community, the downtown and Seminary Street took a decided turn for the worse. In a period of months, the downtown lost its 100 year old O. T. Johnson department store, as well as Carson Pirie Scott & Company, Sears, Penney's and numerous smaller retailers. As the traditional marketplace shifted to the shopping center and the mass merchandisers, a wake of vacant buildings were left downtown. It was against this backdrop, in 1977, when the owners of the Calico Cat, together with a group of local partners and the backing of a local bank, acquired the majority of buildings on the street. A revitalization plan called for opening new types of specialty businesses and for promoting the area's railroad heritage as a tourism destination. In 1978 Galesburg was selected by the National Trust for Historic Preservation to serve in the original "Main Street" pilot project. The Trust's agenda and the Seminary Street mission would dovetail repeatedly from then on. By 1981 Seminary Street received national attention when the Wall Street Journal mentioned the success of the Packinghouse Dining Company in a feature on downtown revitalization. Another Seminary Street restaurant, the Landmark Cafe & Creperie, grew in reputation and popularity and soon specialty shop development followed. At the close of the eighties, Seminary Street was enjoying a growing reputation with half of the buildings on the street restored.

Over the years, more distinctive specialty businesses opened on Seminary Street - all locally owned and operated - and all with a shared commitment to quality and personal service. The Seminary Street Merchants' Association earned the "Outstanding Organizational Award" from the State of Illinois Regional Tourism Council. Seminary Street received nationwide attention when it was featured in the Gourmet magazine cover story, "Celebrating America...Places, Restaurants, Recipes." Seminary Street restaurants have been consistently rated as exceptional values with outstanding quality in both AAA and Mobil Travel Guides. The Chicago Tribune showed Seminary Street in a feature article, "Main Street Reinvented," documenting Galesburg's success and the Main Street program. In recent years, the Seminary Street Historic Commercial District and the Landmark and Packinghouse restaurants have brought home numerous "Best of State" awards from the annual Illinois Governor's Conference on Tourism. Seminary Street was featured in Midwest Living magazine as one of five off the beaten path treasures in the Midwest.

At the turn of the century, as the Seminary Street Historic Commercial District matured, it entered a new phase which created an event in partnership with WTVP, the area’s PBS television station based in Peoria. The Seminary Street Taste/WTVP Auction became a popular annual summertime family festival with large tents lining the street for a day of celebration. Free music and entertainment were provided all day and evening while Seminary Street restaurants and specialty shops featured food and drink. An auction of goods and services donated by local businesses raised funds to support public television. For nearly a decade, the festival drew thousands of people to Seminary Street and raised over $250,000 in support of PBS. In its final year it received national recognition from PBS as the top fundraising outreach effort in the country based on its market size.

As the Seminary Street district passed a quarter century of renovation efforts, the street surface itself was restored with its original brick surface of Purington Pavers, the famous bricks from East Galesburg. The Purington Paver Brick Company was founded in 1849 and supplied the bricks to construct Old Main at Knox College. At its peak 800 workers produced 150,000 bricks a day which were shipped throughout the world to pave streets.

Three of the original four businesses which forged the Seminary Street revitalization—the Calico Cat, Landmark Café & Creperie and Packinghouse Dining Company are still operating today. The other original, Lullaby Dad’s Thirst Parlor, operated for a decade as a pub and then converted to a full-service restaurant. Since those early days, Seminary Street has served as an incubator for dozens of unique businesses.

It is noteworthy to recognize that women entrepreneurs have played a major role in the street’s ongoing development. Mary Matson opened the Calico Cat in 1968 and ten years later, she launched the redevelopment concept for the Seminary Street Historic District, opening the first two restaurants and a pub. Some of the other longtime favorites on the street—Cornucopia Natural Foods, Mother Goosebumps, Hair Etcetera, Cooks & Company, Galesburg Antiques Mall Company, Stray Cat Art were founded by women. In more recent years, Dovetail Rivet & Stitch, Carriage House Bakery, JT’s Carmelkorn Station continue with women owners.

One of the single largest restoration projects on the street was the creation of the Seminary Street Lofts on the east side of the street. The main building which was constructed in 1893 once housed dozens of railroad employees of the CB&Q Railroad in its second story boardinghouse. It was abandoned as living quarters in the 1950s and sat empty for half a century. The Seminary Street Loft project restored the original façade of the building with its distinctive bay windows. Modern loft apartments now occupy the former boardinghouse space.

The Seminary Street District today flourishes with restaurants and specialty merchants and is home to Prairie Players Civic Theatre, the Galesburg Railroad Museum, Discover Depot Children’s Museum, as well as an active Amtrak station. Soon the Galesburg Civic Art Center will unveil its new quarters at Main & Seminary Street and just a block north the Knox-Galesburg Symphony will have a new home.

Since the construction of the Knox Female Seminary in 1841, Seminary Street has evolved for over 180 years. We invite you to visit Galesburg in person and experience our architecture and ambience.